The Growth of Tourism: Southern Pines

In the late nineteenth century, doctors and scientists were only beginning to understand the role of germs in causing disease. Most often, doctors and the general public believed that climate and diet had the greatest effects on people’s health. If a person lived in a town that was close to swamps, too hot, too humid, too dry, too cold, or in a city, his or her health could suffer.

Doctors believed that the best cure for many ailments was exposure to the right climate, clean air, sunshine, and good food. In Europe and the United States, people established retreats or resorts and promoted them to people who were sick or prone to illness as places where they could be cured. The author of this article outlined what constituted a “healthy” or “healing” environment.

With the growth of cities in the late nineteenth century, particularly in the Northeast, the search for clean air and the right climate became more important to Americans. Cities were dirty, the air quality was poor, and houses often had poor circulation. All of these conditions, doctors reasoned, hurt the health of city dwellers. The author of this article noted that New Yorkers could reach Southern Pines by rail in only a day, which made it an ideal location for urban dwellers looking for a healthy environment.

This is an article from the Bulletin of the North Carolina Board of Health in 1894, promoting the healthful climate of Southern Pines, North Carolina, and recommending it as a vacation spot for northern tourists.

A Midwinter Visit to the Sunny South.

Last month the writer was one of a party of medical scribes who enjoyed a ten days’ trip through North Carolina, South Carolina and portion of Georgia. The object of the trip was to study the climate, the sanitary advantages and the business opportunities of the country through which we traveled. Our only apology for recording in the medical press our impressions of the business outlook there is the fact that all sick people are not financially able to devote themselves entirely to health-seeking, and the physician is often called on to prescribe not only a place or locality suited to his physical condition, but also to suggest an occupation that will enable his patient to earn a livelihood in the new home that he may elect.

The sections of North Carolina most desirable for those seeking a mild or equable climate are within a day’s journey, by rail, of New York City.…

From Henderson we traveled southward through the middle of the State to Southern Pines, a most popular health resort, situated in the center of the renowned long-leaf pine belt, famous alike for its elevation, its health-giving balsamic odors and its absolute freedom from malaria. This is undoubtedly one of the most desirable resorts in all the South for persons suffering from the lung, throat or malarial troubles. Its average annual mean temperature is 58 degrees; average summer temperature, 77 degrees; average winter temperature, 45 degrees, while its geographical elevation is more than 600 feet above the sea-level. Its nearness to the Gulf-stream accounts in a measure for its mild winter temperature. The soil is sandy, reaching an average depth of forty feet, hence the heaviest rain-fall is so quickly absorbed that there is absolutely no moisture in the atmosphere. The town is surrounded by great forests of long-leaf pine; the water there is sparkling and pure; The hotels are first-class in the matter of accommodations, and reasonable in their charges; there are ample railroad, telegraph and mail facilities; while the neighboring forests and streams are full of game and fish. Peaches, apples, pears, grapes, melons and other fruits flourish in this section. In addition to the many excellent hotels already open to visitors at Southern Pines another hotel of some 400 rooms is in course of construction and will be ready for the reception of guests before the end of this year. The citizens of the town, the majority of whom are from the Eastern States (and many of whom are convalescents), are hospitable, intelligent and full of enthusiasm, and this fact, coupled with the many natural advantages of the place, guarantee for South Pines a bright future. 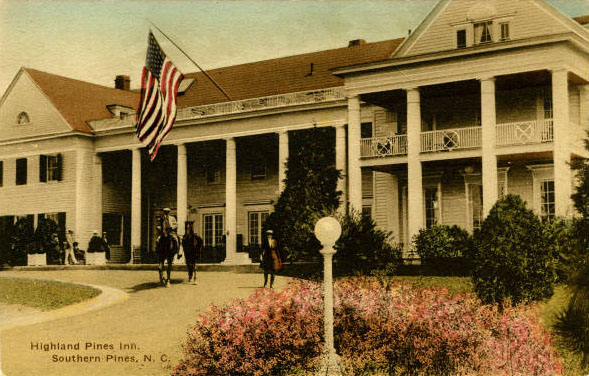 In the early twentieth century, Southern Pines became a destination for tourists. This postcard shows the Highland Pines Inn, where horseback riding must have been a popular activity.