Freedmen's Schools: The school houses are crowded, and the people are clamorous for more

The American Freedmen’s Union Commission was organized in the North and its members raised money, organized schools, recruited teachers, and collected textbooks to educate African Americans in the South. At the end of the Civil War, many people in the North wanted to help rebuild the South and to assist Southerners -- both black and white -- in building a new life. As one of the largest northern organizations working in the South, the Commission worked closely with the U.S. Government’s Freedmen’s Bureau.

This excerpt from an 1867 Commission publication describes the work of the Commission, the progress of Freedmens Schools, and the desire of formerly enslaved African Americans for education. Includes statistical and demographic data on the freedmens schools.

Prior to the abolition of slavery, there was no general public educational system, properly speaking, in the Southern states, except, perhaps, in North Carolina. In some populous centres there were free schools; in some localities academies and colleges; but, for the most part, no adequate provision was made for the education even of the poorer whites. By special law colored children were forbidden access to such schools as were established, and it was a criminal offense to teach the slave to read. Emerging from their bondage, the negroes in the very beginning manifested the utmost eagerness for instruction, and their hunger was met by a corresponding readiness on the part of the people of the North to make provision for it.... No co-operation or sympathy was extended to these educational efforts by the Southern people. On the contrary, they had to contend, at first, against their deep-seated prejudices, and bitter hostility. They were regarded as an unwarrantable encroachment upon their peculiar rights, and derided as an absurd attempt to elevate the negro. The school-houses were, in several instances burned, and school teachers mobbed and driven away, and, even until a very late period the teachers were unable to secure board in reputable white families, and were subjected to every kind of taunt and ridicule. "Nigger teacher" was one of the most opprobrious epithets that the Southern vocabulary furnished. Even in the North this prejudice existed among some of the avowed friends of freed people, and it is a singular fact that one of the early Freedmen's Aid Societies was rent asunder by the unwillingness of a part of its members to co-operate in any movement looking toward the education of the negro, though they were willing to provide him with food and clothing, in order to prevent suffering and death ...

The educational progress has been very rapid and very marked. The first schools were held in deserted churches, in abandoned hospitals, in private houses temporarily occupied by military authority, in old sheds, under the shadow of a tree, and even, in one case, in a dismantled bombproof. The books, in the beginning, were little better than the buildings, the schools depending largely upon voluntary contributions of old and sometimes obsolete school books from the North. In many of the larger places the Freedmen’s schools are now regularly graded, beginning with the primary and ascending to the normal. The teachers are, many of them, among the best in the country, and some of the schools are not inferior to those of the Northern towns and cities. In the District of Columbia, the colored schools, fostered and sustained by the voluntary contributions of the friends of the freedmen, are equal to any in the land.

The effect of these schools upon the public sentiment of the South has been very marked. Many Southern church organizations have taken up the work of education, at least so far as to pass resolutions in favor of its prosecution. Probably only the lack of means prevents their vigorous participation. In several of the States, laws have been passed looking to the establishment of the free school system. In the District of Columbia, the school tax on the colored population is henceforth to be appropriated for their schools. The same is true in the States of Maryland and of Florida. In Tennessee, Missouri and Western Virginia, a free and impartial system of education has been provided for by law, but for want of necessary funds has not yet been put in efficient operation. In the Carolinas, leading men are working for the establishment of a similar system. In Georgia, the colored people have formed themselves into an educational association, with the purpose of establishing schools in every county in the State; in other regions of the South, individuals have contributed of their means for the maintainance of schools in special localities; while in the very States and towns where, a year ago, a “nigger school marm” was the object of undissembled contempt, applications are continually made for situations as teachers by Southern people desirous of engaging in this work. Wherever these schools have been longest established, there the prejudice between North and South is least virulent; and wherever they have not yet gone, there this sectional prejudice still continues with unabated vigor. The eagerness of the negroes to learn can scarcely be overstated. The school houses are crowded, and the people are clamorous for more.

These schools are of four kinds -- the day school, for children; the night school, (often conducted by the same teachers,) for adults; the industrial school, where women and children are taught sewing and other household arts; and Sunday schools. The interest of the freedmen is indicated by the facts that the average attendance is fully equal to that of the whites in the Northern cities; that the pupils beg that the work may not be intermitted for the necessary summer vacation; that, ordinarily, suspension from the privileges of the school is the severest punishment which the teacher needs to inflict; and that out of their poverty the colored people have made so large contributions for the purchase of land, the erection of buildings, and the support of teachers. More than half the schools in the South are sustained in part by the freedmen. Out of about 78,000 pupils fifteen thousand pay some tuition, amounting in all to $11,377.03 per month. The following consolidated school report, taken from the last semi-annual report of Rev. J. W. Alvord, Bureau Superintendent of the Schools, shows the present number of pupils, with their attendance and their educational progress:

General Consolidated School Report, January 1, 1867, for the thirteen States and the District of Columbia.

*This includes their own churches.

It will be seen that the whole number officially reported above is 1,207 schools, 1,430 teachers, and 77,998 pupils. But if we add irregular schools "within the knowledge" of the superintendent, and industrial schools, the number will be 1,399 schools, 1,658 teachers, and 90,513 pupils. Sabbath schools, as reported, are largely increased, and might be added to the above, there being 782 schools, with 70,610 pupils. A very large number, especially adults, go to the Sabbath schools, who do not attend any other schools. -- Third Semi-Annual Report on Schools for Freedmen, Jan. 1, 1867, by J.W. Alvord, Gen. Supt.

The greatest educational need of the South at the present time is normal schools for the education of colored teachers. The freedmen must be taught to educate themselves. Normal schools have already been established at the most populous centres, and arrangements are now in progress the result of which, it is hoped, will be the establishment of at least one such school in nearly every Southern State. There are many localities where a negro teacher can carry on a school successfully, to which it is impracticable to send a white teacher from the North; many, where the prejudice against negro teaching would be less than against instruction offered by a Northern teacher. 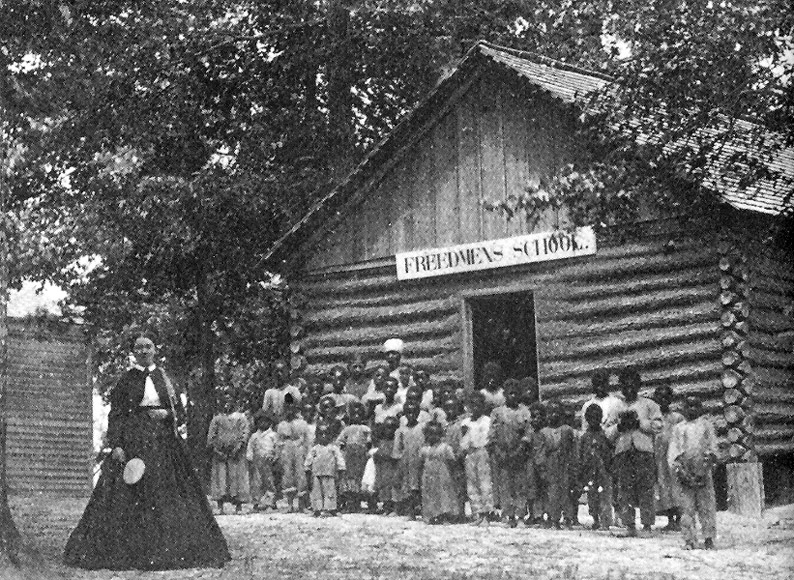