The Committees of Safety

During the American Revolution, the revolutionary provincial congresses or assemblies needed a system of organization and networking to enforce their resolutions, organize activities, and to communicate with citizens. When the First Continental Congress met in September of 1774, the representatives agreed on etablishing a system of local institutions or committees to carry this out. Each provinicial congress or assembly established its own local committees, and organization might take place at the county or district level. Congresses often created committees of correspondence, committees of inspection, and committees of safety. And some colonies, including North Carolina, had already been forming these as early as 1773.

Committees of Correspondence dealt with communication activities to keep people aware of what was going on. Committees of Inspection, also called Committees of Observation, enforced violations of boycott resolutions. And Committees of Safety were organized as the executive authority, eventually replacing the authority of the local colonial government. They also became involved in organizing local militia.

Even after the colonies declared their independence and war began, the authority of the local committees was somewhat ambiguous. However, the committees were an important step in the process of the colonies becoming independent states as they replaced royal governments with their own. North Carolina's Committees of Safety were established in late 1774 and early 1775 by its revolutionary Provincial Congress to help implement the trade boycotts endorsed by the Contintental Congress and to help organize militia activity. At times the Committees in various communities also published their actions and resolutions in a local newspaper.

In April of 1775, Governor Josiah Martin, the royal colonial governor, dissolved North Carolina's colonial assembly because it had endorsed the Committees of Safety and because many members had already convened the revolutionary Provincial Congress in August 1774 and sent their representatives to the Continental Congress in September of 1774. Within months of this action, Martin had lost any authority he had left and abandoned the governor's office.

Read the following excerpts from the minutes of the Committees of Safety set up in North Carolina towns and counties in 1775. These excerpts relate to the Committees' goal of enforcing the trade boycott against Britain.

It being made appearPresumably they meant apparent. to the satisfaction of the committee for this county that we have violated the eighth Article of the Association entered into by the Continental Congress by being concerned in a horse race -- We do therefore most heartily and sincerely declare and profess that we are sorry for our misconduct, and in order that proper atonement be make for such our enormity do promise that in future we shall strictly observe every article of the Association and hope by such behaviour to be reinstated in the esteem and favour of our countrymen and acquaintance which we have justly forfeited by our misbehaviour.

Resolved, that Balls and Dancing at Public Houses, are contrary to the Resolves of the General Congress.Why might the committee (and the Congress) discourage balls and public dancing? It is the opinion of this Committee that every tavern Keeper in this town, have notice given them not to suffer any Balls or Public Dancing at their Houses as they wish to avoid the censure of the people.

Mr. W. Campbell, and Mr John McDonnel reported sundry dry goods imported by them in the Brigantine Carolina, PacketShort for packet-boat, a ship that travels back and forth between two ports carrying mail., Malcom McNeil, Commander and delivered up their invoices to the committee, to have the said goods disposed of agreeable to the resolves of the General Congress.

Ordered, That the said Goods be advertized to be sold at public vendue, at 11 o'clock, on Monday, the 30th inst.

Information was made against Jona. Dunbilrie for taking four shillings per bushel, for salt, contrary to the resolves of this committee, he being sent for waited on the committee, confessed it was a mistake, and promised to return the money so exacted, which the committee were satisfied with.

The committee being informed of a Public Ball, to be given by sundry persons under the denomination of the gentlemen of Wilmington, at the house of Mrs. Austin, this evening, and as all public Balls and dances, are contrary to the resolves of the General Continental Congress, and a particular resolve of this committee: Ordered, That the following letter be sent to Mrs. Austin, to forewarn her from suffering such Public Ball and dancing at her house.

Madam: The committee appointed to see the resolves of the Continental Congress put in execution, in this town, acquaint you, that the Ball intended to be given at your house, this evening, is contrary to the said resolves; we therefore warn you to decline it, and acquaint the parties concerned, that your house cannot be at their service, consistent with the good of your country.

By order of the Committee,
THOS. CRAIKE.

Forty Pounds Sterling be paid by the Chairman of the Committee to any person who shall, in eighteen months from the date hereof, first make in this Province, or cause to be therein made, under his direction, five hundred pair of Wool Cards... and five hundred pair of good Cotton Cards...After sheep are sheared and the wool is cleaned, it must be carded so that all the fibers run the same way. After that, it can be spun into thread and then knitted or woven into cloth. To card wool by hand (the only way to do it in 1775), you place the raw tufts of wool between a pair of cards, wooden paddles with wire faces, and brush the cards together. The process is the same for cotton, except that the cards have finer teeth since cotton fiber is more delicate than wool. A video on YouTube (https://www.youtube.com/watch?v=uhQcadvDO0o) shows a Moroccan woman carding wool. If you want to try it yourself, these are instructions from The Joy of Handspinning - https://www.joyofhandspinning.com/hand-carding.shtml. In 1775, with imports from Britain cut off, wearing homespun -- clothing made from fabric handmade in Ameica -- was a sign of patriotism. People buying "Made in America" today have it a little easier! which the Committee hereby oblige themselves to purchase and pay, ready money, for... The quality and price that such Cards usually cost in Great Britain to be submitted to the Committee.

The Committee also offer a premium of Forty Pounds Sterling, to be paid by the Chairman of the Committee, to the person who shall first make for sale, in this Province, two thousand pounds of good Steel, fit for edged tools....

The following association was agreed on by the Committee, and obligeannexed to the resolves of the General Congress, to be handed to every person in this county and recommended to the committees of the obligeadjacent counties, that those who obligeacceded to the said resolves, may subscribe their names thereto.


We the subscribers, in testimony of our sincere approbation of the proceedings of the late Continental Congress, to this annexed, have hereunto set our hands, and we do most solemnly engage by the most sacred ties of honor, virtue and love of our country, that we will ourselves strictly observe every part of the association recommended by the Continental Congress as the most probable means to bring about a reconciliation between Great Britain and her colonies and we will use every method in our power to endeavor to influence others to the observation of it by persuasion, and such other methods as shall be consistent with the peace and good order, and the laws of this Province, and we do hereby intend to express our utter detestation of all such as shall endeavor to defeat the purposes of the said Congress, and will concur to hold forth such characters to public contempt.

This Committee being informed that Amos Atkinson, Solomon Shepperd and Jno Tison had in many instances obstructed the contribution for the Relief of the Poor of Boston &c.,

Ordered that the Chairman address said gentlemen so as they may appear at the next meeting of the Committee and Justifie themselves in that particular. 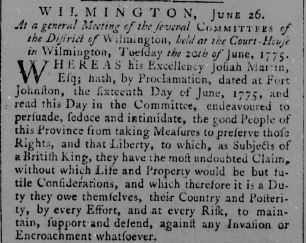