The Capture of Plymouth

At 5:30 A.M. on April 18, a heavy Confederate artillery fire was directed against Fort Gray. Both Fort Gray and Battery Worth in Plymouth returned the fire. Soon a Union gunboat, the Bombshell, was disabled by the Confederate barrage.

At 6:30 P.M. on the 18th the Confederates advanced their line and began an infantry assault upon the Union position; but this attack was abandoned at 8 P.M. The 85th Redoubt was then attacked and captured at 11 P.M.

At 3 A.M. on April 19, the Confederates again attacked Fort Gray. Soon the Confederate iron-clad ram Albemarle, aiding the army, passed undetected down the river. The Albemarle engaged the Southfield and the Miami at 3:30 A.M., sinking the former and driving the latter away. The Albemarle then began to shell the Union defenses.

The capture of Plymouth by the Confederates was significant because it returned two rich eastern North Carolina counties to the Confederacy; it supplied "immense ordnance stores" to the Southern war effort; and the Roanoke River was reopened to Confederate commerce and military operations. 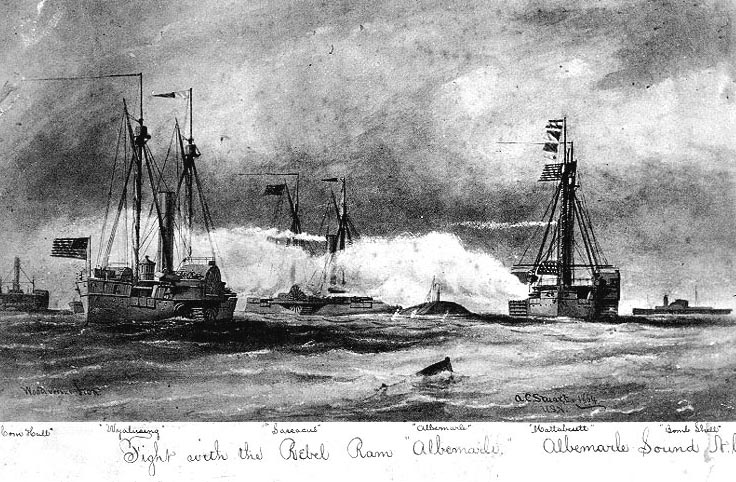 The Confederate iron-clad ship Albemarle, shown here in action in May 1864.