The Burning of Washington

In the summer of 1814, during the War of 1812, British ships sailed into the Chesapeake Bay, easily defeating the American naval ships ordered to stop them. A force of 2,500 British soldiers landed, defeated American militia at the Battle of Bladensburg, Maryland, and on August 24 marched to Washington, D.C. President James Madison fled to Virginia to avoid capture. British troops set fire to the Presidential Mansion (not yet called the “White House”), the Treasury, the building that housed the House of Representatives and the Senate, and other public buildings. The Americans burned the naval yard to prevent ships and supplies from falling into British hands.

A storm arrived that night, and the rain put out most of the fires, saving some of the capital. The British left the city and moved up the Chesapeake towards Baltimore, but they were unable to capture that city.

This brief report appeared in a Raleigh newspaper on September 2, more than a week after the British burned Washington.

Latest of the enemy.

Four days have passed without our receiving any mail North of the Potomac. Newspapers arrive from Alexandria, and very few letters find our way to us from that place or its neighborhoodNewspapers at this time didn't have paid reporters. Instead, editors relied on people they knew to write them letters about what was happening in a particular place, and published those letters anonymously. The idea of a newspaper "correspondent" comes from this time, when the term meant, literally, someone corresponding or writing letters to the newspaper. In 1814, letters had to travel by mail -- no email, no telephones, not even the telegraph had been invented. Mail from north to south would have gone through Washington, but since Washington and the surrounding country were in the possession of the British army, not much news was reaching Raleigh. This correspondent was from Alexandria, Virginia, south of the capital..

Extract of a letter dated Alexandria Alexandria, Virginia, is a few miles south of Washington, on the south side of the Potomac River. Mail from Alexandria could have reached North Carolina in the summer of 1814 without interruption by British troops., August 26, 1814.

This is the first opportunity we have had of writing this week, the office being removed out of town, and the mails stopped. Every public building in Washington is in ashes, and that city and George Town In 1814, George Town was a separate city north of the capital. It is now part of the city of Washington. in quiet possession of the British troops. This morning the barracks and the old ships at the navy yard were fired. For two nights our streets have been lighted by the flames at Washington, which is still smoking. Part of the bridge is destroyed. We are momently expecting a visit from them at this place. You can scarcely conceive the distress, alarm and consternation that prevails in that place, women and children are crying and screaming in every direction hurrying out of Town, all bustle and confusion. Stores and houses principally deserted and closed, the specie has been moved and banks closed. A considerable force is ascending the Potomac, and is stated to be with[in] 30 or 40 miles. How long the enemy will remain at Washington God only knows, or what will be our situation in this district. The British commanders have given us assurances that our persons and property shall be respected, or all such as are not found in arms against them. Fort Warburton is evacuated and the guns spiked. Our troops made but a miserable defence — their conduct was disgraceful, and the disgrace to the nation by the destruction of the capital can never be wiped away. It is stated that only 750 of the enemy were engaged. 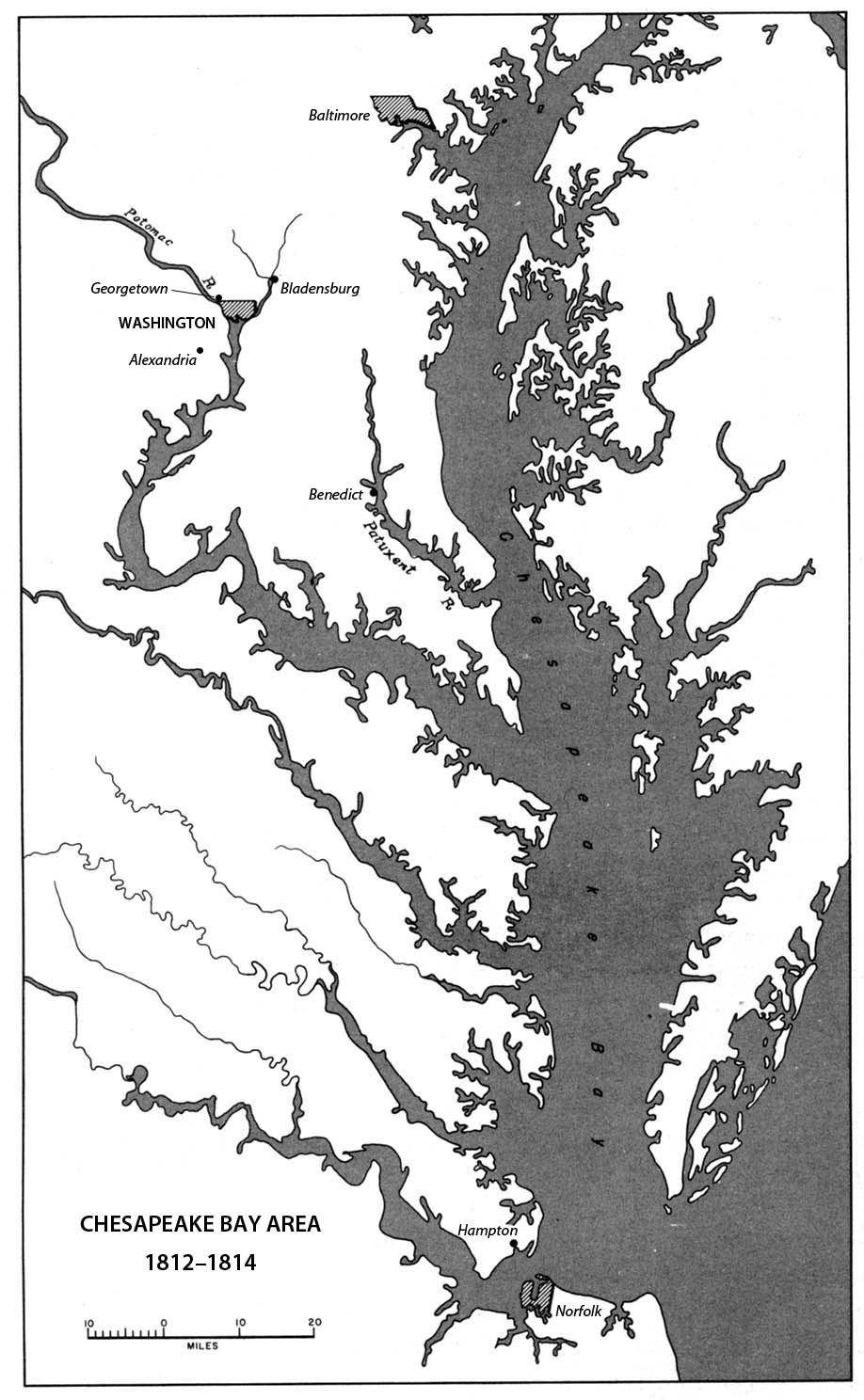 No one knew just how big Louisiana was. This map, drawn in 1804, shows it extending west to the Rocky Mountains. Mapmaker unknown.

Admiral Cockburn Commander of the British troops in the Chesapeake. During his raids in the region, he was accused by Americans of allowing his soldiers to take and destroy private property and even to rape American women. The National Intelligencer, a Washington newspaper, had written so many negative articles about Cockburn that he ordered its offices taken apart brick by brick and all of the type for the letter C destroyed. "Make sure that all the C's are destroyed," Cockburn reportedly told his soldiers, "so that the rascals can have no further means of abusing my name." stated to the deputation from this town that waited on him, that they are in want of flour and should take it, but that they would pay a fair price for itBefore factories, industrialization, and railroads, it was difficult to get large quantities of food and other supplies to an army on the march. When necessary, the army took supplies directly from farmers and merchants. Although quartermasters -- officers in charge of supplying the army -- were supposed to pay for what they took, it isn't surprising that the people they took from weren't always happy with the arrangement! Another letter from Alexandria, dated August 28, in the same issue of The Star

, reported that The War is becoming generally and avowedly odious [hateful in many parts of Virginia. The intolerable burdens which [it] has already imposed upon the farmers, are themes of complaint and execration [curses], even with some of Mr. Madison's warmest friends. Of these burdens, none have been more oppressive, than the frequent military requisitions, which have been made, and are still making in the several counties.]. A battle is thought will take place in a day or two — all is confusion. 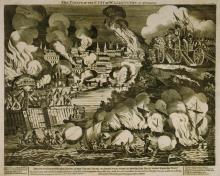 This British engraving published in the fall of 1814 celebrates the taking of the American capital.