"Be saved from the jaws of an angry hell"

Thomas Whitmell Harriss underwent a religious conversion while he was a student at the University of North Carolina in the early 1830s. Like many recent converts, Harriss became deeply fearful for family and friends who had not yet been saved. In this letter to his sister Martha, he begs her to “humbly submit to [God’s] mercy.”

In his letter, Harriss talks about religion in two ways that were new to Christians in the nineteenth century. First, during and after the Second Great Awakening, Christians began to think of God as a benevolent God who wanted men and women to join Him in heaven. In the colonial era, God had been represented as an angry being who would punish even those who believed in Him to remind them of His power. A famous eighteenth-century sermon by the New England minister Jonathan Edwards was titled “Sinners in the Hands of an Angry God.” Instead, Thomas Harriss tells his sister about God’s mercy and the happiness he has received through his religious experience.

Second, in the nineteenth century, people began to use military imagery to talk about their religious goals. Christians saw themselves in a battle against Satan and worldly influences.

Reading this letter, can you identify places where Harriss uses the language of battle to discuss his new-found purpose? How does he talk about life on earth? What other language does he use to speak of God? How does he try to convince his sister to convert?

Beloved Sister
With a heart overflowing with joy and gratitude to an omniscient and merciful God it is that I now endeavor in vain for the want of words to communicate to you my feelings. Oh what a revelation has taken place since you last heard from Chapel Hill – The faces of the many hundred wretches have been lately turned from their dark and gloomy ways of sin, and now directed in the channel that leads to life everlasting. [O yes] dear Sister and out that great number who have lately professed a hope that they have made their peace with God you too can boast of having a fond and affectionate brother enlisted under the banner of that glorious cause — Oh I cannot express to you the joy I have felt when thinking on the wise course I have pursued Now how ever dear and fond sister as you regard the happiness of one to whom you stand most dear give ear to his only one request give your heart to God and never again close your eyes in sleep before you have humbly submitted to his mercy — How can you bear the idea of being separated in the world to come from your affectionate parents who have gone before you and from a fond brother who with eyes wetting with tears is now reaching forth his hands + praying you to go with him – Oh think on the dying advice I beseech you of our tender parents – Can you delay when you bring to mind the entreaties of a fond mother when reclining on her death-bed with an uplifted countenance sending her prayers to God that you her only daughter might be saved from the jaws of an angry hell — Oh! Can you delay after seeing an affectionate Father when bidding adieu to this vain world with a loud voice and aged arm extended pleading with God that you his only care might meet his smiles – Can you bear all this and not be moved then dear, dear, dear, Sister along farewell. – Listen not I pray you to the prating of this gabbling world but now before you refold this letter make your peace [with] God — May the Lord in his mercy bring you to see your state without immediate repentance – My prayers are for you now and forever — 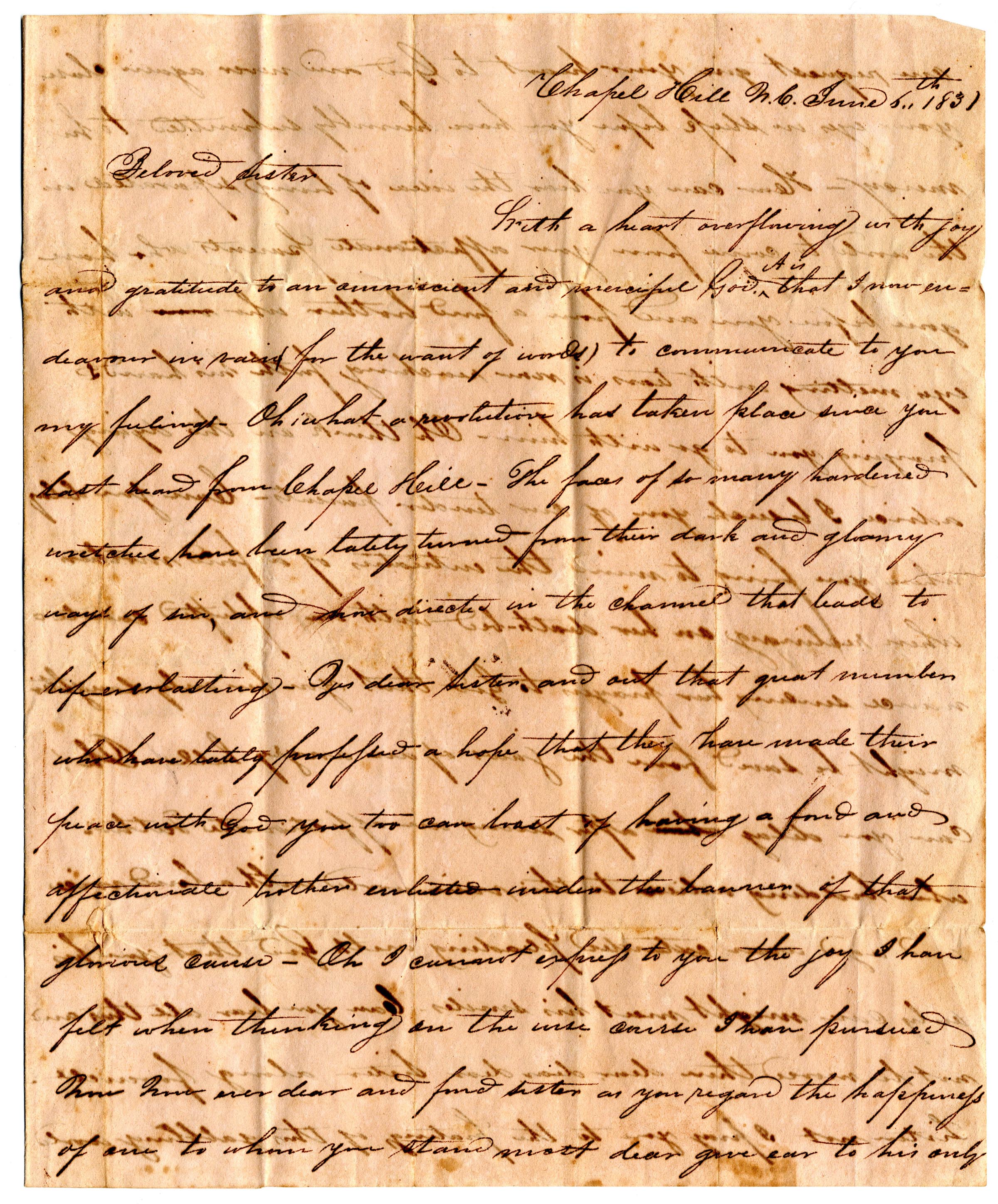