The Battle of the Bulge

This newsreel gave Americans at home an update on fighting in the Battle of the Bulge and showed scenes from the war in Europe. Richard Daughtry, who was there, gives a rather different account.

Oral history interview with a North Carolina World War II veteran about his experiences in the Battle of the Bulge, fought in France between December 1944 and January 1945. Includes historical background and contemporary newsreel footage.

Hayes:
So now you want to talk about the Bulge.
Daughtry:

Yeah, yeah. We had close support to him all the way to Luxembourg. So we were there in the winter of '44 when in December, you know, the offensive started, came towards out of Belgium. I think we were there for a purpose and I can't remember how we got there that quickly, but we did. So to tell you a little bit about it, everybody's got a different thing about the Bulge. You know, they came through Belgium there, a quarter-million Germans came through there. A quarter of a million, 150 super tiger tanks.

On that front, now this doesn't have anything to do with me, but I have to tell this story. The 106th division was there guarding, 16,000 men were there guarding that area. It was called Sneed Eiffel is whatever that language is.

Ok, it was a snowy incline and those Germans were at the top coming down. But before they started, they put one of the heaviest artillery fires ever known in history in that area to soften it up. There was no intelligence. It had been a quiet front for months, no action. They could pull the old crew out giving them a rest, put the 106th in there, a new crew trained in Georgia. Some of the units had been stolen from there and put in other outfits. At least 20%, 30%, 40% of them were taken out, the ones they trained with. And they put these guys that they got out pools which were misfits to replace these guys.

They weren't a full division and that's what was guarding this area. I wanted to make that point. They weren't all trained, ok. When they come over that hill, you know those fellows took flight. There wasn't any way they could stay there. Those tanks and artillery and mortars killed anywhere from 8 to 12,000 American soldiers. They never found out. Those vehicles were actually running the American soldiers down, running over them.

So they fell back to St. Vith, which was in France there near RennesRennes is a city in the western France., but they completely obliterated the 106th division and you never see that in print hardly. But they captured upwards to 3,000 to 4,000 of those American prisoners. The said they were going to use them to trade off for German prisoners, they were trying to cut the allies in two--English on one side, Americans on the other.

But this fellow from BurgawBurgaw, North Carolina, is in Pender County, forty miles north of Wilmington. wrote a good... He was captured by them in that onslaught, put in these boxcars. I saw that article in the Star-News one day, escaped a couple of times. They said he wouldn't eat the soup because it had maggots in it. He said about the third day out, he started liking that maggot soup [laughter].

There's another story associated with that that I've got to tell you. They took 350, you may know that, I don't know, 350 of those men they captured from the 106 and they took them by boxcar through Germany to concentration camp BuchenwaldBuchenwald concentration camp was located 6 miles northeast of the city of Weimar.. This was in WeimarWeimar is a city in the western part of Germany., this was 60 miles beyond Weimar to an area that they were mining, I don't know whether it was uranium or what, but it was something associated with the atomic manufacturer. They took 350 of these men and put them in this concentration camp.

Now you've probably never heard of Americans being put in a concentration camp. Alright, 350 of them were a place called BergaBerga concentration camp was located 55 miles southwest of the Buchenwald concentration camp. American soldiers were taken from the Buchenwald camp and used as forced labor in Berga. They built 17 tunnels for an underground ammunitions factory. Twenty percent of the American soldiers who worked at Berga died of disease and malnutrition before the camp was liberated by Allied forces in 1945. and that's closer to the Russian border, 60 miles beyond Weimer. So these soldiers when they would march through this town in the morning, they weren't fed properly. They would make these motions, food motions like they wanted something to eat. The town was composed mostly of women. Men were either killed in the Army or something. But they had compassion for these soldiers and so they would throw out stuff in the streets like potato peelings and stuff they fed to the animals or poultry. These soldiers would pick them up and eat it and it helped them survive.

Hayes:
Oh God.
Daughtry:
But imagine the German women feeling compassion. If they'd have been caught, they'd have been shot on the spot.
Hayes:
Well tell me about, was the Bulge happening, you were not in the middle of it, but did you feel the impact of it or...
Daughtry:

Yes, I'm going to tell you about it, but I wanted to tell this story about these people of the 106th before I forget about it. Seventy of those guys were Jews. They were killed immediately. So these little stories are big, but you never hear about it. The only way you hear about it sometimes is from somebody that knew about it. But getting back to the Bulge, alright. For three days prior to that, they were beating the hell out of us, the Germans were. Snow and fog, the fog was really 25 to 50 feet at the most you could see. It was Americans killing Americans a lot of times. You heard something, you shot. We didn't but the infantry guys did. I knew a lot of them and talked to them and so this was going along for several days, you know, after they came through and swing over, after they had surrounded the 82nd and the 101st. See, all that came in short order. 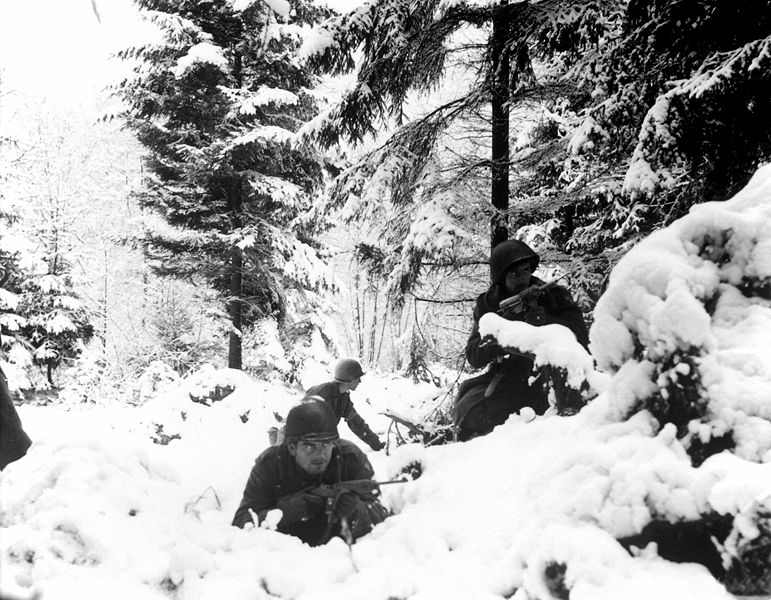 American soldiers in the 75th Division take cover in the deep snow of Belgium's Ardennes Mountain region during the Battle of the Bulge.

Hayes:
Well were your guys getting called in to bomb?
Daughtry:

Well they couldn't because of the snow and fog. No air support for the 101st and 82nd. So I'm getting to the good part. The third night, well it went to zero, froze over all that snow and ice, bottled up. The Germans had sent a spearhead from the Bulge towards the city. We were in there, and so we could hear the artillery coming. It got louder and louder those three days, boom, boom. That third day, they were within five miles of Luxembourg. Alright, the night after the third day, you could see 100 miles straight up [laughter]. I mean it felt like that, it felt so good. Our group was on the left flank, they had a P-47P-47 Thunderbolts were a U.S. fighter jet used in World War II. outfit on the right flank. Alright, we went in there, caught those guys bumper to bumper, they couldn’t bulge. They were frozen in the ice, their head vehicles.

Hayes:
Really.
Daughtry:
They had these cannon fodder, the young guys out in front. They were stationary, all of them there stuck. It took all day long and we completely obliterated that spearhead, the 200 P-47's. Alright, that gave General Patton clearance. I went to that battlefield. I cannot explain it. I had to see what it was, but horse-drawn, bumper to bumper a lot of them. You know they hauled their food supplies.
Hayes:
You mean afterward you went in to see...
Daughtry:
Yes, yes.
Hayes:
It was burned-out tanks.
Daughtry:
Yes, it was strong. You know, you heard about the thing that happened over there in Desert Storm about that?
Hayes:
Yes, yes.
Daughtry:

Alright, well, this was just like that only more so. It was 500 vehicles and like I say most of them were horse-drawn. Those that where the 50-calibers hit those horses, they would explode you know. It was a ferocious thing. Those kids they had out, you know they put their 14, 15-year-old kids out in front. They look like ducks from the air. I didn't see it, but the pilots were telling me about it and they looked like grown men out there, but some of them were just like cannon fodder. They did that a lot, young people out in front. So that, as I saw it, broke it wide open and we also got a presidential citation for that act of clearing away from Mr. Patton. So it took him a while to get, I don't know how long it took him. It was 70-80 miles worth with tanks and so forth, it took him a pretty long time to get there, 8 or 12 hours, I don't know. But when they got there, it went right through that wall of Germans, right on through the other side, split the Germans. So I don't know whether you ever heard it explained just how it was. But from then on it was Katy bar the doorSaying meaning take cover; there’s trouble ahead. The origin of the saying is unknown. for the Germans. You know what I mean. They were in full retreat after that maneuver of Patton through that pocket. The Germans, though, were good for that kind of warfare and we lost a lot of men in that Battle of the Bulge. I cannot say it was over 75,000 men easily, American soldiers killed, and pursuant to Germany because they were good at retreating. You know they were professional soldiers and following retreat, you were on the offense. You were in trouble.?

This newsreel gave Americans at home an update on fighting in the Battle of the Bulge and showed scenes from the war in Europe. Richard Daughtry, who was there, gives a rather different account.

Oral history interview with a North Carolina World War II veteran about his experiences in the Battle of the Bulge, fought in France between December 1944 and January 1945." data-share-imageurl="">

This map shows the “bulge” in the Allied lines after the German Ardennes Offensive of December 1944.