Andrew Johnson’s Amnesty Proclamation allowed most southerners to avoid punishment for their role in the rebellion if they took an oath pledging their loyalty to the United States. People who were excluded from taking this oath had to petition the president for a special pardon. The letters on this page were written by North Carolinians to President Johnson asking for amnesty. Each person’s claim was unique, but all three people attempted to persuade Johnson that they sincerely wished to become loyal citizens of the United States.

The petition of R.L. Abernathy, of the Co. of Burke, and State of N. Carolina, respectfully showeth to you Excellency, that prior and up to the time of the passage of the Ordinance of Secession by the Convention of the State of North Carolina in May 1861, your petitioner was a devoted friend of the Union of the States, and used all his efforts in public and private to preserve the Union of the States; and that even after the Ordinance of Secession was passed, your petitioner kept in regular correspondence with W. G. Brownlow, your Provisional Governor of Tennessee, and other distinguished Union men, as to the best manner of proceeding in reference to this matter, until all mail arrangements between the North and the South were broken up. Your petitioner further showeth to your Excellency that after the Ordinance of Secession had passed, the office of District Tax-Collector of 54th Dist, of N. Carolina was tendered to him by the Chief Collector of N. Carolina, which tender your petitioner thrice refused to accept, but which was returned to him the third time with the full assurance that it would pay your petitioner well for his services. Your petitioner being a poor man and having a large family to support, finally accepted the appointment upon these grounds. These are the only reasons that prompted your petitioner to take any post whatever in favor of the so called Confederate States against the United States.

Your petitioner being as your Excellency may deem expedient, and as the merits of his case may require — and as in duty bound your petitioner will ever pray —

The petition of America C Bower widow of The late Col George Bower deceased a citizen of Ashe county aged 49 years respectfully showeth unto your Excellency that she may be excluded from the benefit of your excellency’s proclamation of amnesty of pardon breaking date of 29th day of May AD 1865 in clause thirteen (13) of the exceptions in said proclamations entailed, by reason of the fact that The amount of her Taxable property is more than twenty thousand dollars and the facts after stated may amount to a voluntary aiding in the late rebellion. That during the progress of the war she came into possession of a considerable amount of confederate treasury notes, with which she purchased interest bearing confederate bondsBonds were loans made by individual people to the government. In exchange for money, the government (or an agency authorized by the government) would provide the person with a piece of paper or contract. The government pledged to repay the loan with interest to the individual person or their heirs. Bonds allowed the Confederate government to raise millions of dollars to support the war effort. After the war, however, these bonds were useless because the issuing government no longer existed. To the sum of about Eighteen Thousand dollars. Those purchases were made from agents of the confederate government, but were made by an agent Mr. Davis of Salisbury without special instructions to loan the money to said Conf Government. She would show That in no other way has she given any voluntary aid to the late rebellion. That she is included in no other clause of exemptions in your Excellency’s said proclamation contained, and that she has been in no other way concerned in said rebellion save as above stated she would further show that she has Taken and subscribed the oath prescribed in your Excellency’s said proclamation, a certificate whereof is hereunto appended, and she now bears a true and faithful allegiance to the government of the United States. She therefore prays your excellency to grant unto her a full pardon in the premises, and your petitioner in duty bound will ever pray.

To his Excellency
Andrew Johnson
President of the United States

The petition of John E. Patton a citizen of the County of Buncombe in the state of North Carolina respectfully shewith unto your Excellency that prior to and up to to the time of the breaking out of the late rebellion in the Southern States, he was devotedly attached to the Federal Union, but after the declaration of hostilities and the actual commencement of hostilities his affection for the Federal Government gradually declined and that he finally lost all hope of reconstruction. His sympathies were entirely enlisted in behalf of the South and he deemearnestly hoped for the establishment of Southern Independence[.] That he was above military age and did not participate actively in the rebellion further than that his sympathies were enlisted as above indicated and occasionally to cooperate with a local company composed of old men organized for the purposes of protection against robbery and theft, etc. in the town of Asheville. That he paid taxes from time to time as the same were required of him and participated in most of the popular elections, but never cast a single vote for Secession. Only two of his sons out of five were engaged in bearing arms and one of them only a short time. They were all of military age. He earnestly opposed all unlawful warfare and any and every departure from the laws of civilized warfare being all things a Conservative and acting with that party then existing in North Carolina and has always been a moderate man in his political views and actions.

He respectfully represents unto your Excellency that he is worth taking into consideration debts due him etc, etc. twenty thousand Dollars if he can collect the debts due him. During the war he continued in his peaceful avocation of agriculturist and that he is rejoiced at the termination of a war he always deplored as a national calamity and that he earnestly hopes the Federal Union will now be perpetuated and has sincerely and truly returned to his allegiance to the Federal Government and will for all time to come be a good and loyal citizen of the United States.

Your petitioner is advised that he is probably by reason of his property value excluded from your Excellency’s Amnesty Proclamation dated 29th day of May AD 1865 and therefore prays your Excellency to grant unto him special pardon for such participation in said rebellion.

And your petitioner as in duty bound will ever pray, etc. 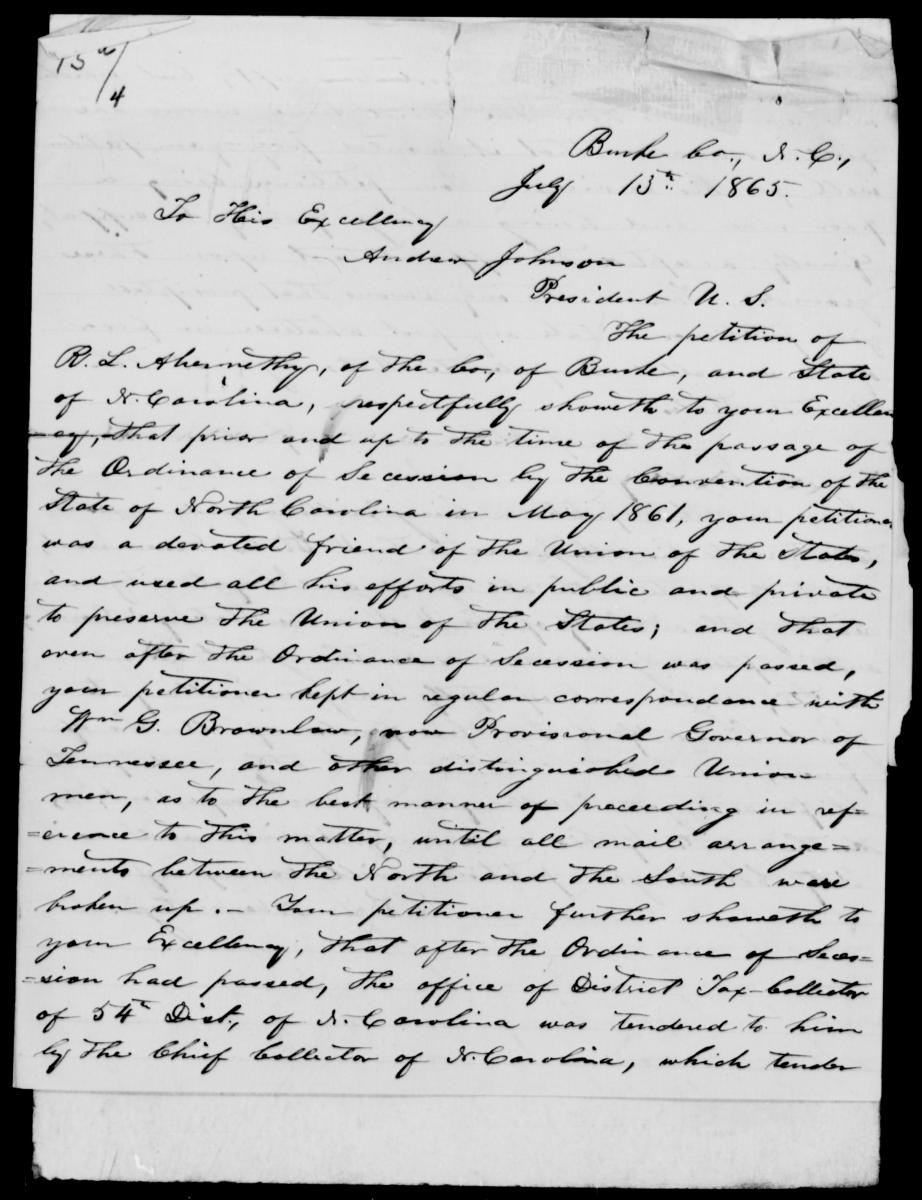 R. L. Abernathy's handwritten application for pardon and amnesty from the National Archives. 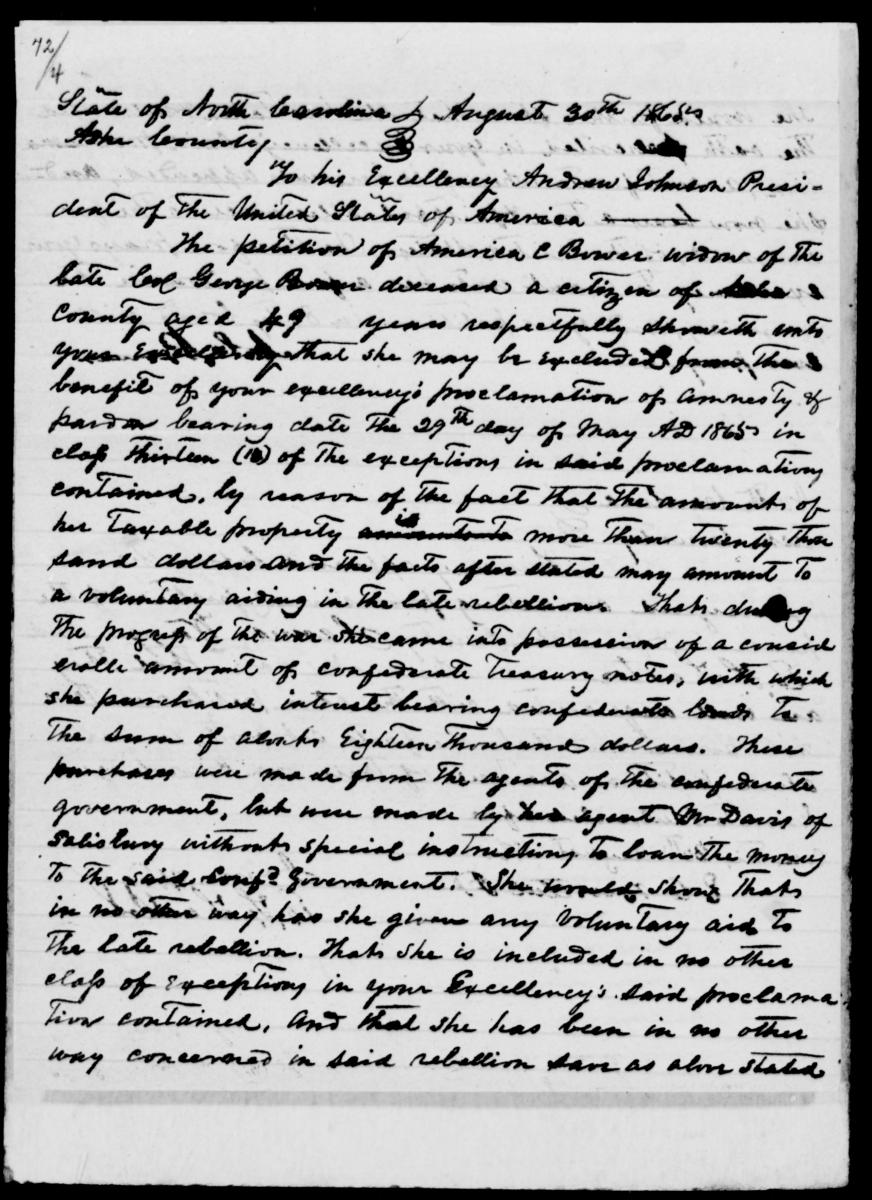 America Bower's handwritten application for pardon and amnesty from the National Archives.