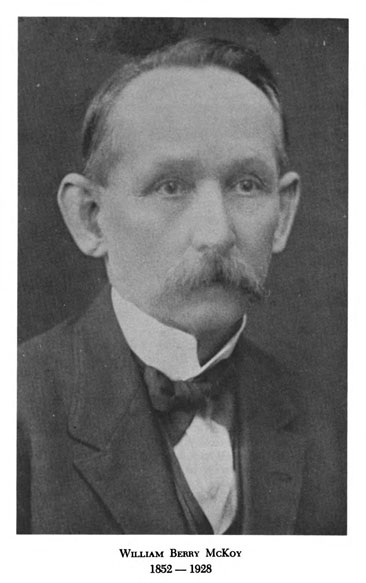 William Berry McKoy, attorney, historian, and botanist, was born in Wilmington, the son of William Henry (11 Aug. 1827–28 July 1858) and Francenia Eliza Berry McKoy (24 Dec. 1833–24 Apr. 1889). William Henry, the son of Dr. William McKoy of Clinton, moved to Wilmington and became a merchant; Francenia was the daughter of Dr. William Augustus and Ann Eliza Usher Berry and a descendant of James Hasell, chief justice of the colony and acting governor at the departure of Governor William Tryon.

William Berry McKoy attended private schools in Wilmington, including the school of the Reverend Daniel Morrelle and the Cape Fear Academy. He entered Princeton University in 1872 and was graduated in 1876. He then went to Raleigh, where he read law with George V. Strong and was admitted to the North Carolina bar in June 1879. Returning to Wilmington, he specialized in title law and practiced his profession until his death.

A Democrat, McKoy was a member of the executive committee of his party for twenty years and served as chairman in 1898. He was the New Hanover County attorney from 1896 to 1899 and court attorney for several years. When still a young man he made a set of abstracts of titles for the county.

On 23 Oct. 1876 McKoy organized the Historic and Scientific Society of Wilmington, and in 1897 he organized and was the first president of a fencing club. He was a member of the Wilmington Light Infantry and Grand Master of the Masonic order in North Carolina in 1912.

Intensely interested in the history of the Lower Cape Fear, he devoted much of his time to historical research and writing. Among his articles are a sketch of Governor Benjamin Smith who was an aide-de-camp to General George Washington, a history of Masonboro and Hilton Plantation, an account of Indian pottery found near Wilmington, and a biographical sketch of Captain Johnston Blakeley.

McKoy and Katherine Bacon were married on 15 Dec. 1886. She was the daughter of Henry and Elizabeth Kelton Bacon and the sister of Henry Bacon, who designed the Lincoln Memorial in Washington, D.C. The McKoys had five children: Elizabeth Francenia, William Ancrum, Henry Bacon, Francis Kelton, and James Hasell. McKoy was an Episcopalian. His funeral was conducted from St. James's Church, and he was buried in Oakdale Cemetery, Wilmington, with Masonic rites.